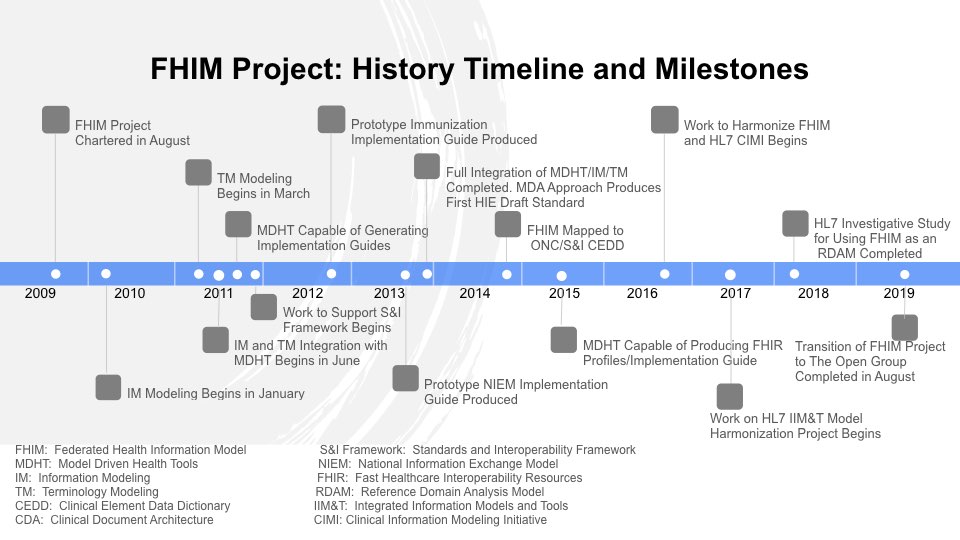 The original intention was to develop an information model as part of a federated enterprise architecture, which is reflected in the FHIM Project charter.  Governance consisted of a steering committee of five federal partners and a workgroup that provided guidance on the day-to-day activities of the project. Initially the project consisted of one full-time FHA resource supported by in-kind resources from the federal partners. In 2011, the full-time resource was converted to part-time and money was added to the contract to hire three additional part-time resources to lead work related to information modeling, terminology modeling and implementation.  In 2012, two additional part-time resources were added, an informaticist to support the terminology modeling work and an additional resource to support the information modeling work.  The maximum level of resources on the project never exceeded 2.5 FTE.

A strategy document was developed in 2010 to guide the work of the FHIM Project.  The primary goal of the project was to develop a comprehensive, integrated set of standards that fully support health information interoperability, including semantic interoperability.  Achieving this goal required work in five strategic areas:

In January 2010, information modeling of the FHIM started; terminology modeling in support of, and integrated with, information modeling started in March 2011; and implementation work (in support of the information exchange framework strategic area), which leveraged an open source application called Model Driven Health Tools (MDHT), started in late 2011.  Also in late 2011, a prototype project demonstrated the ability of the FHIM Project to generate CDA implementation guides, and work to support the National Information Exchange Model (NIEM) program was begun.

Also in 2011, work was begun to support the Office of the National Coordinator (ONC), including the Meaningful Use regulations and the Standards and Interoperability (S&I) Framework program.  A significant amount of work was devoted to this effort, including a separate ONC contract with the FHIM Project to investigate how the project could be used in support of the S&I Framework.

In 2014, the FHIM was mapped to the ONC Clinical Element Data Dictionary (CEDD) and the following year to the CEDD successor, the Common Core Data Set (CCDS).  The FHIM has continued mapping to ONC data requirements as they evolved over the years, including the latest set, the US Core Data for Interoperability (USCDI).

In 2017, a significant amount of work was accomplished in support of the HL7 IIM&T project, including a two-day meeting of all the participants to plan future activities.

In 2018, an HL7 investigative study was completed to fully define how the FHIM could be leveraged as a Reference Domain Analysis Model (RDAM) to harmonize all the individual HL7 project and work group related domain analysis models.  Also, further work was completed to support ONC programs, including Trusted Exchange Framework and Common Agreement (TEFCA) and USCDI.